I have always approached new concepts and ideas with a healthy amount of skepticism, so I came to the concept of non-attachment in a similar way. But I think it might actually be working! As I understand it, non-attachment is a state in which a person becomes less attached or reliant on things, people or concepts of the world to achieve happiness and peace. For example, if you don’t get your typical spot in the yoga room, it is not a cause for anxiety or stress. Or if you don’t get that many comments on a particular blog post, it does not ruin your day (smile). Or if you get a scathing email from someone you trusted and always felt understood your best intentions, you don’t fire off a hasty reply and regret it later. Yeah, that last one. 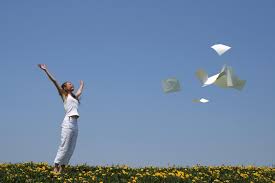 A few weeks ago, an issue came up in my advocacy work that was quite testy. There were many different opinions, the issue was rooted in the history of the organization, and the discussions about it were getting quite emotional. I think this is good, because healthy debate between individuals with the same end goal almost always leads to a better end result. But, it can be messy. One day after a long conference call on this topic, I received an email from a collaborator that was scathing in its tone and content, almost accusatory, as if this issue was my fault in some way. I was shocked and angry.

I received the email as we were driving to my daughter’s middle school play. When I saw it, my heart started racing in anger. But I tried to remember some of the meditation work I had been doing, and chose to notice my anger, rather than give into it. I forced myself to think, “This is an upsetting email, but I am not going to let it ruin this exciting evening for our family.” And I put my phone away.

Later that night, when I went back to the email I again became angry and upset. But since it worked the first time, I tried to notice my feelings rather than give into them, and was able to put my phone away again. When I next looked at the email, I came to realize that it wasn’t really about me after all, but was a symptom of this person’s frustration with the important issue at hand. I decided to just let her vent and not reply, which would have only led to an unproductive argument.

I was shocked at my ability to stay calm and to not respond in anger. I mean, I have been known to have a bit of a temper at times. Was this non-attachment? Had I learned to recognize my anger, but not give into it. To control my own happiness rather than rely on affirmation from others. To respond rather than react! Well, let’s not get carried away, but it did get me through the incident without firing off a scathing email in return, and one that I would surely have regretted. I am excited and hopeful that I can build on this positive experience with more.

Fellow yogis, do you practice non-attachment?

© Hot Off The Mat ™. Unauthorized use and/or duplication of this material without express and written permission from this blog’s author and/or owner is strictly prohibited. Excerpts and links may be used and shared, provided that full and clear credit is given to Hot Off the Mat with appropriate and specific direction to the original content.