I arrived early for class because it was a new studio for me, and a new language. I was going to take my first Bikram yoga class in Paris. The check-in proceeded well — the receptionist spoke English — but noticing the inadequacy of my “one year of French in college” language skills, she commented, “The class will be in French, will that be alright for you?” “I’ll do my best,” I replied. We both smiled, me a little bit nervously, but honestly, I was not worried. I knew the flow of the class and I felt that I would find my way using visual clues from the other practitioners if nothing else. I was right, but what I didn’t realize was how much of the dialogue I could still comprehend, despite not understanding the spoken words. 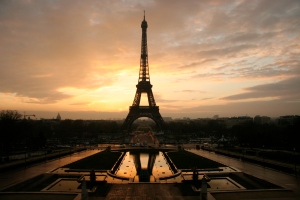 One of my favorite things about Bikram yoga is that the series is the same wherever you go — a common link that ties us all together. It also allows me to practice when I travel, combining two of my favorite activities, and helping my body cope with the ups and downs of time changes, unfamiliar foods, and sleep patterns. You can read about some of my other Bikram travel experiences here. I always find that after a Bikram class on the road, I feel better acclimated to the new environment, have more energy, and enjoy my time more.

But back to Paris. I set up in the back so that I could follow the yogis in front of me in case the language barrier did become an issue. A few of the students exchanged smiles with me, and we shuffled our mats around so everyone could see. I felt like I might have taken someone’s regular spot, but everyone seemed to cope with it well. We are all creatures of habit in the end.

Class began. The words were unfamiliar, but the rhythm and flow of the class were the same. The pauses in the dialogue told me when to inhale and exhale in the breathing exercise. The inflection in the teacher’s voice told me when to make those final pushes in Half Moon pose. The cadence of the words told me when we were nearing the end of Standing Bow pose. It was almost melodic, as if the class had more of a soundtrack than a dialogue. I wasn’t so focused on following the words, but rather the flow of the class. I felt peaceful and free, a different type of class experience.

But then I heard my name. Followed by rapidly spoken French, a pause, and then, “Oh, yes, English,” and the correction — to widen my stance in Standing Separate Leg Head to Knee pose — which aptly demonstrates that wherever you go, there you are. I’ve been working on that one for ages.

I loved it! I felt so welcomed that the teacher was willing to adapt to my poor French and give me the correction again in English. But more importantly, it tied this unique class experience back into my overall practice. This was not a one-off experience, but a continuation of my practice. I felt connected to the yoga and to all Bikram yogis no matter where they call home. I can’t wait to see where in the world I practice next.

Readers, do you maintain your practice when you travel?

One thought on “Parlez-Vous Bikram?”

Join 2,085 other followers
Follow Hot Off The Mat ™ on WordPress.com

© Hot Off The Mat ™. Unauthorized use and/or duplication of this material without express and written permission from this blog’s author and/or owner is strictly prohibited. Excerpts and links may be used and shared, provided that full and clear credit is given to Hot Off the Mat with appropriate and specific direction to the original content.